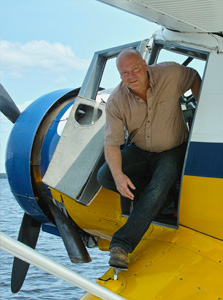 Duane Riddell first became involved in AMCO in 2008 when he took over as Airport Manager in Red Lake, Ontario. He became the Northwest Regional Director for AMCO in 2012 and Vice President in 2016. Duane brings with him over twenty nine years of related aviation experience.

Graduating from Confederation College in 1985 with a diploma in Aviation Management, Duane started his flying career in Red Lake, Ontario, accumulating over nine thousand hours on float and ski aircraft. He continues to fly commercially today. Duane found himself holding such key positions as Chief Pilot, Maintenance Control Manager, and Operations Manager at some of Northern Ontario’s largest bush flying organizations.

Having a desire to learn, Duane continued his education throughout his career receiving additional diplomas in Aircraft Mechanics and Airport Management.

Duane is heavily involved in the community of Red Lake and currently sits on the executive of several volunteer boards and organizations. The most predominant of these boards include the Red Lake Publicity Board and the Norseman Festival Committee which he chairs. The Publicity Board is dedicated to finding ways to promote and ensure continued tourism to the Red Lake area while the Red Lake Norseman Festival is a world renowned festival dedicated to preserving the rich aviation heritage of the Norseman Aircraft.

In past years, Duane served as president for the Northwestern Ontario Air Carriers Association, representing over thirty Commercial Air Services in the region. For seven years Duane represented NWOACA in Ottawa and sat on several CARAC committees.

The Red Lake Airport has seen exceptional growth in passenger numbers in the last few years and with this growth numerous capital improvements. Duane has risen to the task and overseen the construction of a new terminal building, animal control fencing and several airfield electrical improvements.

Duane looks forward to sharing his experiences with AMCO members and believes wholeheartedly in giving back to the aviation community that has served him so well.