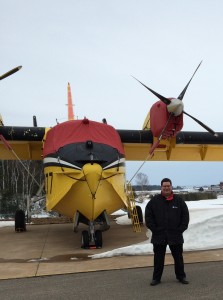 Mr. Bos joined the Sault Ste. Marie Airport Development Corporation on March 1, 1999 less than one year after the transfer of the airport to a private not-for-profit corporation from the federal government.  Terry was brought in on a one year contract to assist the corporation in completing their first business and land use master plan to guide them through their new airport ownership.

Holding a BBA from Algoma University, Terry’s business experience was an essential ingredient in his position at the Sault Ste. Marie Airport.  Following the completion of the Business and Land Use Master Plan the Corporation determined that Terry was an asset and retained him in a marketing position.  On November 1, 2002 Mr. Bos was promoted to Finance Manager and on July 1, 2004 was promoted to Airport Manager. Terry later went on to become Accountable Executive, and on July 27, 2010 he was named CEO of the Sault Ste. Marie Airport Development Corporation.  During Terry’s tenure as CEO the corporation has seen record passenger levels at the Sault Ste. Marie Airport increasing from a low of 121,991 in 2010 to 195,080 in 2014. The Sault Ste. Marie Airport is situated on approximately 733 ha, the Airport’s major facilities include: Two, 1,828 m (6,000 ft.) by 61 m (200 ft.) asphalt runways, with a network of connecting asphalt taxiways.  A concrete aircraft apron adequately sized to accommodate numerous large jet aircraft (i.e. B737), a 2,275 m2 (24,500 ft2) passenger terminal building, and is a certified airport.

Terry joined AMCO in the position of President in 2010, and after serving the four year term limit became the AMCO Past President. He currently serves AMCO as Treasurer. Under Terry’s leadership AMCO has grown to the thriving airport collective that is today with a growing membership and growing AMCO staff to serve them. As of October 2014 Terry Bos is an Accredited Airport Executive.