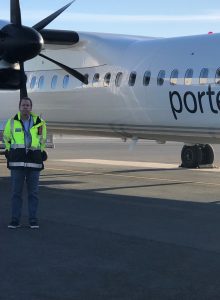 Michael Antle began his aviation career at Pearson International Airport in 1989 under Transport Canada until the eventual transfer of ownership to the GTAA. Over his 20 years at Pearson he worked within Air Traffic Services, Emergency Planning, Environmental Services and Airport Operations. Although focused on airport operations and in the Airport Duty Manager role for the majority of this time Michael was afford opportunities to assist with the implementation of various programs. Programs such as De-icing Operations, Airside Enforcement, and Emergency Evacuation were a few of the more interesting to work on.

After leaving the GTAA Mr. Antle again worked briefly with the Federal Government from 2009 – 2010 as Manager Groundside Operations for the G8/G20 summit. His experience with Pearson operations provided a solid background for planning and oversight during the summit.

In 2010 Michael joined the Toronto Port Authority where again he focused on airport operations first in the Airport Duty Manager role and later as Manager of Groundside Operations during the construction and opening of the new pedestrian tunnel. Occasionally he has acted as Fire Chief during transitional periods.  He currently holds the position of Director Airport Operations and Planning.