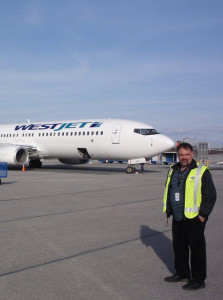 Chris Wood landed at the Region of Waterloo International Airport in September of 2009 taking on the role of Airport General Manager.  Chris was previously employed by the Greater Toronto Airports Authority (GTAA), holding positions in Operations, Strategic Planning, Facility Activation and Consulting Services at Toronto Pearson Airport.  During the opening of Pearson’s new Terminal 1, he managed the logistics, resources, and the execution of trials, and oversaw the shutdown and deactivation of Terminal 2.  Through GTAA Consulting Services, Chris conducted peer reviews for the British Airports Authority and the Dubai Department of Civil Aviation.  Chris also managed the successful activation of Terminal 5 for JetBlue Airways at JFK International Airport in New York City.

Chris holds a Bachelor of Science degree in Aviation Technical Management from Embry-Riddle Aeronautical University and an honours diploma in Airport Operations and Management from Georgian College.  He is an accredited member of the International Association of Airport Executives (IAAE), and holds a private pilot’s license.  Chris has taught various aviation courses at Georgian College, and holds a Board position on the International Association of Airport Executives Canada, the Canadian Airports Council as well as the Airport Management Council of Ontario.

Chris’s aviation career began 20 years ago at the Region of Waterloo International Airport where he spent a summer working at the Waterloo-Wellington Flying Club as a ramp attendant.